At their inception, “robot vacuums” were reserved for futurists and the Skymall market. (What up, DJ Roomba?). They were initially ahead of their time. Between the confusing setup, wimpy suction power, and the second-hand awkwardness (schadenfreude, if you’re a luddite robo-sadist) of having to pull one out of its misery after watching it wiggle between two couch legs for half an hour, robot vacuums somehow felt more annoying than just vacuuming on your own.

But that was then. Thanks to functional apps, better sensors, and some healthy robo-competition, these vacuums are now a pretty great experience in most homes. Though a little roving disk will never be as powerful as a plug-in vacuum or our favorite cordless one, that’s fine: 95% of vacuuming is about picking up easy debris and the types of particles that make up dust. (Don’t look up how much of dust is just skin cells.) For most people, a robot vacuum that cleans four days a week automatically will create a much cleaner environment than simply running a spot vacuum whenever you spill enough that you can see.

The best robot vacuums are both decent robots and decent vacuums—a robot that deftly darts around corners and tables is useless if it can’t pick up a Cheerio, and a robot that could pull sand out of a shag rug is useless if it keeps threatening to tumble down the stairs. Below, our favorite robot vacuums below will make your home effortlessly clean. 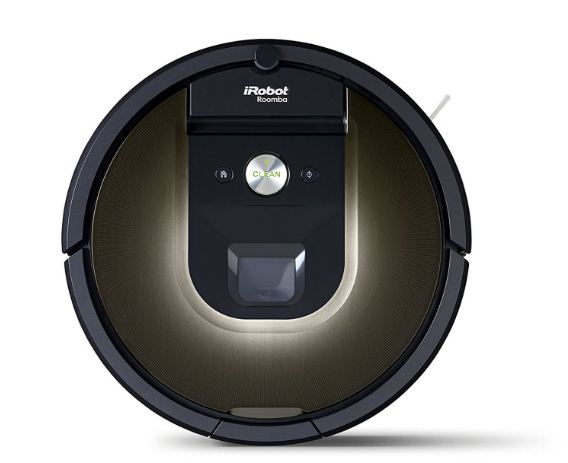 iRobot, the godfather of the robot vacuum, makes a great robot vacuum at just about every price; you could do worse than setting a budget and buying whatever vacuum they offer at it. Though the Roomba 980 is expensive, it delivers on the core promise of a robot vacuum: it cleans really well and doesn’t need you to do anything. The vacuum is stronger than competitors, and automatically ratchets up the power for tricky carpets without wasting extra energy on lower-pile carpets or hardwood floors. It gets stuck less, but still hits every corner. The app makes it easy to schedule cleans, start one-off cleans, and check the status of the Roomba. Where other vacuums meet their match with hair or wires on the ground—sometimes requiring a manual removal of hair that is not enjoyable—the 980’s debris extractors do a good job of avoiding snags. Two included “virtual walls” (little soda can-sized lasers you set up like trip wires) help prevent the Roomba from going where it’s not supposed to, and buttons on the vacuum itself make it easy to send home when, say, a friend comes over and you don’t want it whirring around your legs. In short: this is the vacuum you’re picturing when you’re thinking about buying a robot vacuum. It vacuums well and it doesn’t need your help. The only possible improvement? A bigger bin, which iRobot’s latest release, the i7+, solves. But at almost a grand, we’re sticking with the 980 for now, which has a large enough bin to make it through most full cleanings anyway.

The Robot Vac with the Perfect App Vac

The Neato D7 required just a little bit more assistance than the Roomba 980, but it offers extra features that make it a worthy competitor. For one, the app is great: after a few sessions, it delivers a pretty complete floor plan, and you can draw lines where the vacuum shouldn’t go, which is far easier to use than physical sensors or magnetic strips that other vacuums force you to install. You can also set up “spot cleanings,” which mean you don’t have to send the thing off for an hour when you just want it to circle the area around where you just ate. You can also manually control it like an R/C car, which is impossibly lazy and also very fun. It’s got a powerful vacuum, though it fares less admirably against hair than the 980 (they include a brush with a tiny blade for cutting it free). It also managed to get stuck more often, and you have to be more careful about placing it back down because it’ll lose its bearings if you set it back down more than a few feet away. But overall, the extra options and easy app make up for these somewhat typical robot vacuum flaws.

If you’ve tried a robot vacuum before and given up, then this is the one that might bring you back in. It solves a lot of the problems that plague most robot vacuums. Its unique design makes it better at hitting corners (which is where all that dust is), and its manual settings, like the Neato D7, make it easy to tackle problem spots (with adjustable suction power) when a full-home clean is overkill. It does a good job adjusting power for different surfaces, which, combined with its battery, means it’ll make it through most homes without needing a recharge in the middle. After mapping out the room, it also does its best to run in straight, orderly lines, instead of bumping around until it ends up covering the entire room like most vacuums. I’m not sure this matters, but I liked thinking my robot was orderly, and maybe it’ll scare the shit out of your pets less.

Okay, I know what you’re thinking: all these robot vacuums are goddamn expensive. Which is true! But think of it this way: it’s like an R/C car, a vacuum, and a camera all jammed together in a foot-wide disc. Hovering just around $200, the DEEBOT is about as good as it gets for budget robovacs. It’s impressively powerful for the price, and its app has all the features of its wallet-shrinking competitors. At the end of the day, it doesn’t quite match up to the suction powers of the rest here, and its sensors aren’t quite as good at preventing trouble, but if you have a childless, petless, mostly carpet-less home, this vacuum gets about 80% of the way there at less than 50% of the cost.

At first glance, the Lumen looks a bit similar to a breathalyzer — at the top, there’s a mouth-piec
Read More