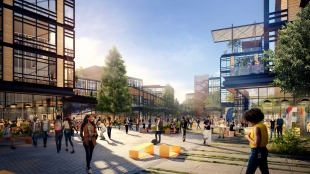 While the raw numbers of the project remain unchanged from Facebook's initial proposal in July 2017, the configuration of space on the site has been revised. Instead of having a number of small, publicly accessible mini-parks, Facebook proposes to build a 4-acre public park with recreation fields and a kids' play area at the southwest corner of the site, near Willow Road and Mid-Peninsula High School. 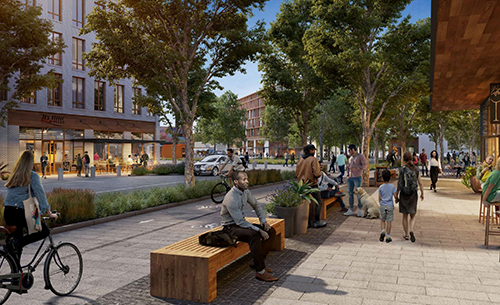 In addition, a proposed full-service grocery store and pharmacy have been moved closer to Belle Haven, a lower-income neighborhood located opposite of Willow Road from the proposed development. The revised plans also include dedicated bike lanes and wide sidewalks for pedestrians, while promising "better integration" between the proposed office buildings and the retail and residential buildings. It would also have a "town square" gathering area.

John Tenanes, Facebook's vice president of global facilities and real estate, said in an interview that the Oakland-based Signature Development Group, led by president Michael Ghielmetti, will take the project through the approval process, public outreach and buildout.

While the buildings would be on the taller side for Menlo Park – within the city's new guidelines of up to 85 feet - Ghielmetti said, "This isn't going to feel like San Francisco or downtown Oakland. It's a new neighborhood in Menlo Park."

Tenanes said that the reason Facebook went quiet on the project over the last year is because the team was searching for a developer for the site.

"In the concept, I think we had all the right ingredients," Tenanes said. "We've been in Menlo Park for eight years, and this project is an extension of what we talked about when we first got here."

Several elements in the proposal are based on requests that Facebook has heard from local residents since 2011, when the company and the city co-sponsored a "design charrette" to envision how to create a "sense of place" connecting Facebook, then limited to the former Sun Microsystems campus, with the Belle Haven neighborhood and other businesses near Willow Road and Bayfront Expressway.

During that process and those that followed, residents voiced interest in more housing, greener buildings, better bike and pedestrian infrastructure, and better connectivity to the Bay Trail, Tenanes said.

That preliminary meeting was followed by a yearslong process with hours of community meetings to update Menlo Park's general plan, which was approved in December 2016 and massively increased what developers are permitted to build on the city's eastern side, where Facebook is one of the largest landholders.

Since Willow Village was first proposed, Facebook has collected feedback from the community, including through the Planning Commission and City Council study sessions, as well as a series of public town hall meetings on the proposal.

Skype Free vs Skype for Business