Dubai’s police force has apparently started training its officers how to pilot a new flying motorbike, an initiative from the Russian-owned California-based Hoversurf first unveiled at last year’s GITEX convention in the United Arab Emirates.

The vehicles are expected to be in action in just over a year’s time, coinciding with Expo 2020 – the ‘festival of human ingenuity’ – which Dubai won the right to host.

Each S3 2019 hoverbike costs $150,000, though Hoversurf has gifted Dubai police its first example to allow training to begin and to help get the promotional ball rolling. The two parties signed a partnership agreement in late 2017.

Based on a prototype previously made from aluminium, the body of the ‘electric vertical take-off and landing bike (EVTOL)’ is a one-piece carbon-fibre composite, which both reduces the weight and adds structural rigidity. The new curb weight – now just 114 kg (253 lb) – means Hoversurf has been able to install a ‘more capacious battery’ discharging 12.3 kWh as part of the S3 2019’s hybrid powertrain. 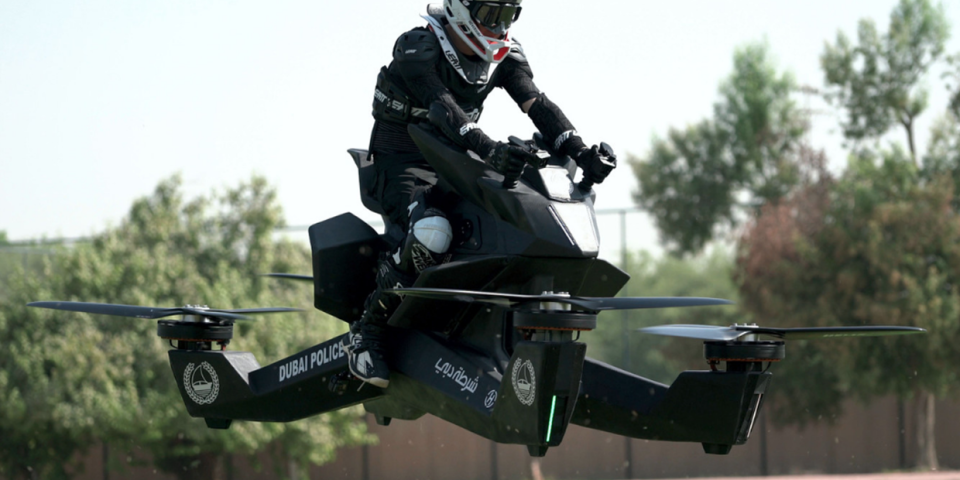 This also allows the drone, restricted by law to a 96 km/h top speed (52 knots) and an altitude of 16 ft (5 metres), to fly for up to 40 minutes on what the company calls ‘drone mode’ (this drops to anywhere between 10 and 25 minutes when the pilot alights).

Also newly developed are the three-blade propellers, each of which is said to be 10 per cent quieter than the previous twin-blade design and smaller in diameter by 5 cm. Power comes from the as-of-yet unspecified ‘new engines,’ which provide 33 kW of power apiece (around 45 hp), while total thrust is said to be 364 kg (802 lbs).

Bear in mind this is not the first time Dubai police has thought big when it comes to promotion. Its ‘Supercar Fleet,’ purely promotional, already boasts a Bugatti Veyron, an Aston Martin One-77, a Lamborghini Aventador and a BMW i8 among others. Until recently, Dubai police also held the Guinness World Record for the largest ever synchronized car dance, an accolade only overhauled last month by the Nissan Patrol.